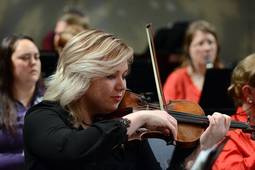 Hannah Pendergrass started studying the violin at age 7 with local Suzuki teacher Susan Howren. She later studied with several other teachers including Melody Brock of Kansas City, MO, The Concertmaster of the Charlotte Symphony, Calin Lupano,  & Internationally renowned teacher David Russel.  She holds a BA in Liberal Studies from Thomas Edison State University and is also certified in levels 1-5 in Suzuki teacher training as well as levels 1 & 2 in the O'Connor String method. She has played with several string orchestras and ensembles including the Gaston String Orchestra, Charlotte Symphony Youth Orchestra, & the Charlotte Civic Orchestra. She currently plays with the Gardner-Webb University and The Symphony of Rutherford County. She founded and has served as director of Acorn Acres String Camp since 2010. She plays regularly with her church worship band and performs a in a variety of styles, and especially enjoys Folk and Worship styles. 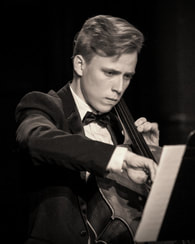 Levi Pendergrass has studied Cello under various instructors including Saxon Scarborough and Melanie Freeman.  He has performed with several orchestras and ensembles throughout the years including Gaston Strings Orchestra, Symphony of Rutherford County and he is currently a member of the Gardner Web University Orchestra. He regularly performs at various venues, including Churches, for weddings and other special events.  He has taught several students through the years and has served as the lead Cello instructor at "Acorn Acres String Camp" for the past 4 years.  He began his Suzuki Teacher Training during the summer of 2014 and plans to continue studying the Suzuki Teacher Training method.  Even before Levi started studying the Cello, he was brought up listening to the famous classical composers that we look up to today.  Although Levi loves and has studied classical music for his entire music career, he also enjoys improvisation and increasing his Cello repertoire by exploring various alternative music styles.